The CCC's annual public meeting is held in early October of each year on the Friday before the Hound Ears leg of the Triple Crown Bouldering Series. You can find minutes from previous meetings below and we hope to see you at the next one!

Here is a link to the slideshows presented at our 2020 and 2021 Annual Meetings. 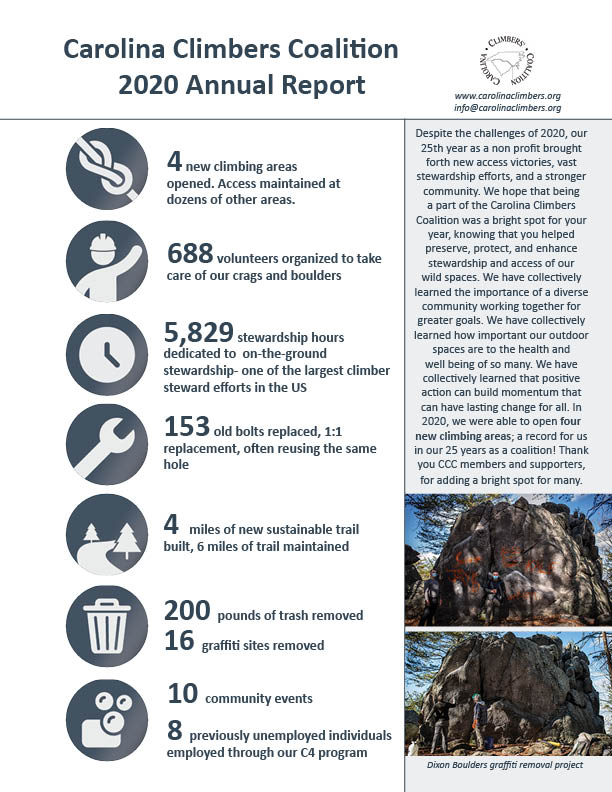 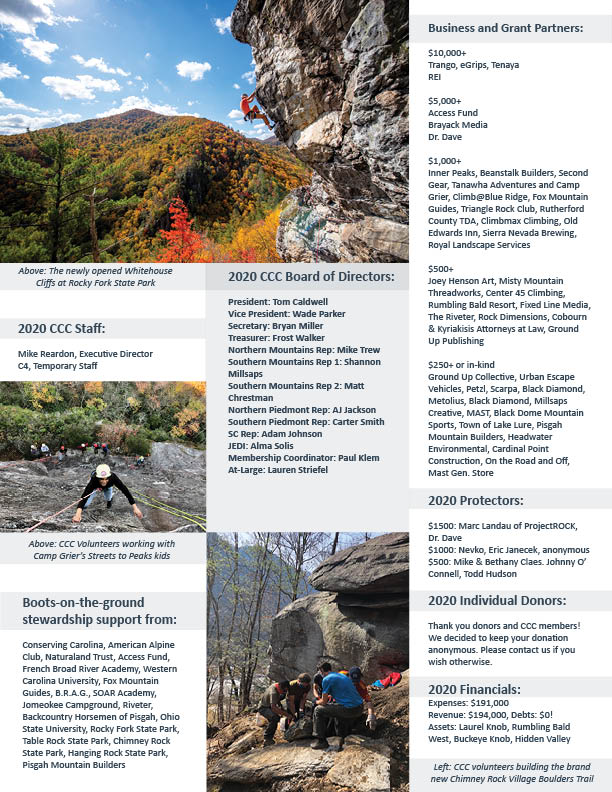 Here is our 2019 Annual Report. We could not be more proud of the work completed by our community this year. If you were a volunteer, individual donor, access supporter, or business partner, thank you! We could not do this without YOU!

We had a great meeting at Hound Ears, with many community members and board members present. Thank you Triple Crowne Bouldering and Marmot for making this event possible. See this PDF version for the presentation and updates given during the meeting.

The annual meeting of the CCC was held on October 5th, 2018 at the Foscoe-Grandfather Community Center. Many thanks to everyone who came out for the meeting and for your patience with our traffic-induced delayed start! We elected a new set of board members, with several new members and some changes in current member's roles. We want to send a special thanks to the following people who are leaving the board after many years of service to the community:

The CCC's annual meeting was held on October 6th at the Fosce Community Center. 50+ people were there to hear updates on the year and a discussion of the future of the CCC. If you missed the meeting, here are the highlights and the full presentation:

The annual CCC meeting was held on 12/11 at the Lake Lure Community Center basketball court. We went old school. In addition to general updates, the board proposed the following list of candidates for various positions where current terms will expire and all were approved by those present. Congratulations to new and returning board members!

The 2014 meeting was held at the Foscoe Grandfather Community Center on October 3rd. Over 60 enthusiastic climbers attended and heard the latest updates from the CCC. Many thanks to everyone who came out, it was great to have so many psyched CCC members and supporters in one place. If you missed the meeting, the presentation slides are available below.

The fall meeting of the CCC was held on Friday, October 5th at 7:30 PM in the Foscoe community center. The turn out was very good with around 80 people present. See the attached document for the full run down of everything that was presented including ara updates, but here are the highlights:

Call to order: Around 6:20 PM, Anthony called the meeting to order and presented an agenda for the meeting.