On June 21st, 2022 the Carolina climbing community lost a true friend and partner when Benjamin Crotts, Jr. passed away at 93. Ben was the owner of Ridge's Mountain - known to climbers as the Asheboro boulders, and a fervent protector not only of the land, but of climbing on that land. The CCC leased the Asheboro boulders from Ben and his wife Eunice (who passed away in 2019) and over the years we made several attempts to purchase the property from him. Although we could never come to terms that were agreeabale to everyone, the property did eventually sell to a conservation buyer with climbing access preserved thanks to Ben's commitment to climbing access. 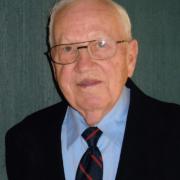 "I met with Ben on numerous occasions, talked to him on the phone and received letters (he was never one for emails, always having his daughter send them on his behalf) and I cherish evey one of those interactions. Although he was a tough negotiator, he always had the best interests of climbers and of protecting Ridge's Mountain at heart. When the neighbors shut down the access road, Ben acquired an adjacent parcel and created guaranteed, deeded road access at his own expense. Simply put, there would not be climbing at Asheboro if it were not for Ben Crotts and the community owes him a great debt.

With best wishes to his children - Brenda, Gwen, Joey and Sharon and the rest of his family, the CCC continues to work to preserve their father's legacy as we know that's what Ben would have wanted. Personally, I'm honored to have known him and even more honored to be called a friend."