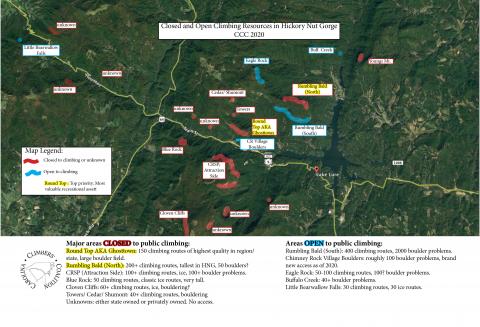 Rumbling Bald is located within the greater Hickory Nut Gorge, NC. Due to incredible rock quality and close proximity to large populations of climbers, Rumbling Bald sees an estimated 20,000 climbers per year, typically between the non-tourist months of October to March. The economic impacts of climbers to the Lake Lure region during the off season, the health benefits of outdoor recreation spaces, and conservation of wild spaces like Rumbling Bald are just a few positive aspects of climbing access at Rumbling Bald. Although we all love Rumbling Bald, the increased demand for climbing spaces in Hickory Nut Gorge is urgent. Rumbling Bald's parking lot was expanded to 100+ cars just last year. This season, the parking has filled every weekend by 10AM. The impacts on the land of all of these people unnecessarily funneled to one location, coupled with our obvious need to spread out during Covid-19 pandemic, have made the call for expanded climbing access in Hickory Nut Gorge even more clear.

Rumbling Bald is located within the greater Hickory Nut Gorge and contains an estimated 20% of Hickory Nut Gorge's climbing resources. The other 80% are closed due to NC State Parks not approving climbing access, private property, or lack of infrastructure. The CCC has worked for years with local partners to open areas in Hickory Nut Gorge like Little Bearwallow Falls, Eagle Rock (thank you, NC State Parks!), Buffalo Creek Boulders, and most recently the Chimney Rock Village Boulders. Partners like Chimney Rock State Park, Friend of CRSP, Conserving Carolina, the Village of Chimney Rock, and Lake Lure, have been critical in many of the more recent climbing access improvements we have been able to approve.

What if the 80% of the currently-closed world-class climbing areas in Hickory Nut Gorge were open to climbing? Can you imagine having a less crowded Rumbling Bald and access to dozens of more boulder fields and cliffs, all with the same incredible gneiss we all love? Can you imagine the economic impacts to the region. Imagine the health benefits to having these recreational areas open to climbing. Can you imagine the conservation benefits to opening these lands to recreation and having an army of land stewards spearheading trail work and well overdue invasive removal? Hickory Nut Gorge would be, could be, and should be a world class climbing destination.  Areas like Ghosttown (AKA Round Top), North Side of Rumbling Bald, Attraction side of Chimney Rock, Blue Rock, Cloven Cliffs, The Towers, the many boulder fields above the Village of Chimney Rock, and many more COULD be opened with the newly proposed Hickory Nut Gorge State Trail Plan. To give one example, Ghosttown (AKA Round Top) has been called "the single best crag on the east coast". It contains a plethora of historic crack lines, a boulder field that is Rumbling Bald-quality, three of North Carolina's most difficult 5.14 routes, and some of the most outstanding views in NC. The Hickory Nut Gorge State Trail could pass right under this resource, but your input to the state park system is highly needed. Your input can help NC State Park trail planners decide favorably toward expanded climbing access within Hickory Nut Gorge, accessed via the currently hypothetically-aligned Hickory Nut Gorge State Trail.

This is where YOU come in. Please consider filling out this survey and plug in as much information about why expanded climbing access within Hickory Nut Gorge is meaningful to you and meaningful to the visitors and residents of the region.  Deadline is Jan. 15, 2021!