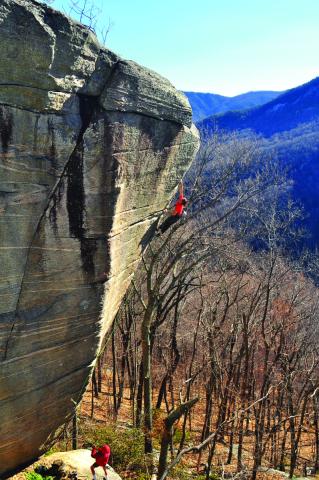 The 60 acre parcel containing a good percentage of the Ghost Town Cliffs, located in the Hickory Nut Gorge and currently private property, are for sale for $1.4 Million. The property includes three of the most difficult rock climbs in the Carolinas, dozens of splitter cracks, and world renown climbing that has been publicly inaccessible for 15+ years. The quality of climbing, cultural significance, recreational significance, location, and conservation value of the land can not be over stated. The property sits directly across from 404' Hickory Nut Falls. It contains about 25% of Ghost Town's over all climbs (the rest are on State Park property). This property was the site of the 1970's-era Ghost Town in the sky tourist attraction with a mock western town located in the large meadow overlooking the falls. This meadow was also a key scene in the film "Last of the Mohicans" as the location of the Native American village in the film. The property contains a 70' waterfall and many boulders. It borders NC State Park land and some of the established climbing routes are on cliffs owned by the State Park, but many are on cliffs on this parcel. Without this property, it will be very difficult for the NC State Park system to connect its Hickory Nut Gorge State Trail between the upper and lower Hickory Nut Gorge. Without this property, the historic, unique climbs at Ghost Town will be likely lost to public access forever. For some context, climbers have described this as "the best crag for splitter cracks in the southeast, like T-Wall, but better".

Real estate history as we know it: In the early 2000's the lot was purchased by a developer who wanted to build nearly 30 houses on the property. That development did not happen but that exact outcome may happen today. The property is listed, actively being shown, and at risk of being lost to public outdoor recreation and enjoyment forever.

Carolina Climbers Coalition's involvement with Ghost Town: Since Chimney Rock State Park's inception in 2006, we have formally requested access to the Ghosttown cliffs that lay on State Park property but have been denied continually. One aspect of the this has been a lack of access due to the 60 acres that are now for sale. When the proposed housing development went under in the early 2000's, we attempted but were unable to secure access to this 60 acre parcel that is now for sale.  In both 2017 and 2020, we partnered with the Conservation Fund to have appraisals performed on the property as we had heard the owner was potentially selling. The appraisals fell short of the asking price by half. Nonprofits, Land Trusts, and government agencies can only pay appraised value of land. Our hands are tied and we could not make an offer even if we did have $1.4 million in the bank, which we don't. Only a private individual or business with capital is able to make this type of purchase. Additionally, in 2020, the CCC built the Chimney Rock Village Boulders Trail and made specific alignments in hopes that it would provide future access to Ghost Town and the amazing recreational assets of this property. The Chimney Rock Village Boulders trail currently ends near the property line of the property for sale.

SOS Idea: Do you know of a CLIMBER-FRIENDLY investor/ developer/ glamping resort-builder/ recreation or conservation minded person and/ or business? If so, please put them in touch with us quickly. Hickory Nut Gorge development is rampant and we fear this key stone property will be lost forever. Please note that we would work with a buyer on public access assetts such as easements, trails, parking, etc. Please note that we may even be willing to work with a buyer and would be willing to parcel and purchase the undevelopable rocky portions of the property for the sake of outdoor recreation and public benefit.  Please contact mreardon@carolinaclimbers.org. Serious inquiries only please.