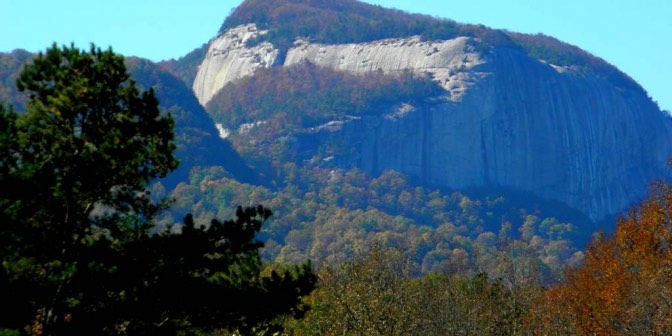 Table Rock is home to the tallest and most wild cliff in the Upstate! This granitoid gneiss dome features some of the best and boldest face climbing in the southeast, put up by some of the most storied granite aficionados. The dense grain of rock may be some of the most impeccable in US.

The adventurous climbing at Table Rock is unparalleled. After the strenuous uphill hike, you will be greeted with miles of unadulterated views of the Blue Ridge Foothills. Once above the tree line, the exposure can be quite dizzying since the cliff is the tallest spot around. The area is completely encompassed by state park land, which should leave this spot unchanged for years to come.

The cliff faces southeast to south and is a great cold weather climbing option. Many of the routes have a tendency to run water, so it is wise to avoid the area after a rain storm. Most climbing routes only require a single rack of cams with nuts and tricams being optional. A few routes require a 4 camalot size, and one route in particular a 5 and 6 camalot size. As with most SE granite, small hybrid cams can be very useful, especially on newer routes. Due to the length of the pitches and wandering nature of the routes, it is wise to bring extendable draws. Almost all routes require two 60m ropes to rappel. It is important to wear a helmet since most of the climbing is just below the summit hikers trail.

There is now a CCC funded climber’s kiosk just past the trail head that starts at the White Oaks campground area.

Parking: White Oaks Pavilion inside Table Rock State Park. Park in front of the pavilion, find trail behind the pavilion.

There is a park entrance fee.

Due to its lack of weaknesses, many routes have little to no natural protection. While some climbs may be completely bolt protected, this is by no means a sport climbing area. Climbers should expect knobs, crimps, water grooves, lots of slab, and the occasional crack. Most routes that do not have natural protection, two to three grades below the crux grade may not be bolt protected. Know your limits!

Currently, the only areas open to climbing are the E and SE faces of Table Rock, including Pumpkintown, which can be seen from highway 11. See the Pumpkintown section under climbing areas for more information.  All other faces of Table Rock are closed, especially the North Face. In 2020, the CCC worked with NC Department of Natural Resources and SC State Parks to decrease the closure zone. Routes on the Walker Buttress and east (climbers right), including the Watergroove Wall  are closed during Peregrine nesting season Feb 1-Aug 15 each year. Routes west of the Walker Buttress on the Main Wall of Table Rock and Pumpkintown Walls are open year round thanks to this new collaboration of CCC and area partners.

The Carolina Climbers Coalition hosted a three day festival at Table Rock State Park focused around making trail improvements to the climbers approach. The American Alpine Club awarded the CCC with a Cornerstone Conservation Grant powered by REI to help pay for the Access Fund Conservation Team as well as the necessary tools to complete the repairs. In addition to the trail day work, several small crews were led by the CCC to clear brush, remove invasive vegetation, and buck dead fall. With the work of 75+ volunteers, the approach trail to Table Rock is now easier and more sustainable. The CCC is grateful for partners like the AAC and REI.

Volunteers at the festival enjoyed the community portion of the festival immensely as well. There were several slide shows throughout the weekend as well as raffles, clinics, local business outreach, community climbing, and camaraderie. The CCC was able to share the stories of our local partners including the AAC. Due to the popularity and impact of this event, the CCC plans to host this style of festival annually at locations in need. Please keep an eye out for upcoming events so you too can join in on the festivities.