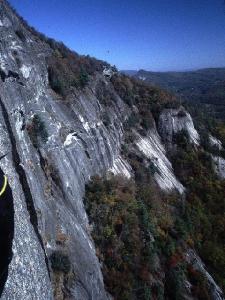 Nestled amongst the granite domes common to Western Carolina, Whiteside is unique for the area since it sits at a much higher elevation and is made of diorite schist and feldspar. This rock type yields steeper and much more featured terrain than the local granite, unfortunately, at the price of being much softer is some spots. In the summer months, it can often act as a storm magnet due to it being the tallest spot around. Storms can come over the south side with no warning.

Whiteside has climbable faces in almost all sun aspects. This means that a climber can chase shade during summer or sun during winter. You could ice climb on the north side and be in a t-shirt climbing on the south side all in the same day. The area is most known for long multipitch traditional climbs on the southeast face such as the Original Route and Traditions as well as some more difficult testpieces like Warriors Way and Arm and Hammer. There are additional long multipitch routes on the northern tip of the mountain, sometimes extending all the way up to the Devil’s Courthouse. Information for these routes can be found on mountain project.

For those looking for single pitch climbs, there are three main areas, the Catwalk, Boulder Problem Area, and left of the Main Face. The Catwalk is a NW facing area with many crimpy test pieces. It is a great summer spot that gets sun in the afternoon. The Boulder Problem area faces WSW and can be good all year. It is home to one of the most classic and well-protected corner systems at Whiteside, the Boulder Problem in the Sky. There are many more one to two pitch climbs in this area from 5.8-5.12. The area left of the Main Face of Whiteside hosts many single pitch climbs in the 5.10-5.12 range. This area faces SE like the Main Face and goes into the shade around 3pm in the summer.

In winter, ice climbers flock to the iconic Starshine, an often thin two pitch ice climb that is sure to get your adrenaline going. Next to Starshine are some less frequently formed ice climbs - most notably Mother Russia. To the right of the Catwalk area, above Starshine, some fat moderate ice often forms. There are many more ice climbs peppered throughout the northern aspects. A topo can be found on mountain project describing the location of these climbs.

Whiteside Mountain is a great year-round climbing destination. The area boasts hundreds of climbs, both single and multipitch, from 5.8-5.12. In addition to rock climbing, the north facing parts of Whiteside also host some of the best ice climbing in the area during the winter months. Whiteside Mountain has a bit of a reputation for long runouts between gear, but most of the single pitch climbing is very well protected. Whiteside is often regarded as one of the most aesthetic face climbing areas in North Carolina. You should be confident at the grade you intend to climb and solid with multipitch technique for the longer routes. Most of the trade routes have undergone hardware upgrades, but there are still some older routes that have suspect bolts.